even the phrase 'each other' doesn't make any sense* 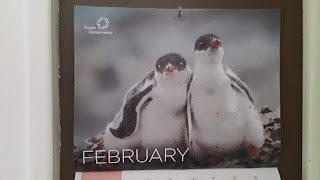 My February calendar picture is of two Gentoo penguin chicks. One bird seems to have its wing around the other. That one also looks squattier than the taller, thinner one. Is it self-conscious the way I was around my tall, thin friends as a youngster? The penguins look like they’re pursing their bills like my daughters and their friends pucker when taking selfies. Will they take a bazillion more to get it just right, before posting? Is the light hitting? It’s easy to see the penguins through a human lens, so accustomed are we to anthropomorphizing nonhuman beings. Remember pet rocks or the movie Zootopia?

I realize I know nothing about penguins. I suppose they have the same needs: food, water, shelter, community but are we always self-referencing? I stare at the penguins and wonder if I can see penguin in myself. They are alien and have nothing to do with me. What's more, I don't want to connect to them. I have better ways to spend my time than to understand penguinness. My perception has not been trained to do this and my imagination fails. I can't get past my anthropomorphism.

We are told the road to empathy is to see ourselves in the other. Yet we other the other so we don’t have to be empathic: Indigenous people are savages, black people are subhuman, women are inferior, transgender people are an abomination, and so on; insert prejudice here. This allows us to select who we will treat humanely. Has not every holocaust hinged on spurious distinctions between us and them?

As an Egyptian, I grew up with prejudice against sub-Saharan Africans as well as African Americans. I was admonished to straighten my hair and stay out of the sun so I wouldn't be mistaken for a black person. As I work to address this inherited bias, sometimes I am confronted with my knee jerk racism:

They are alien and have nothing to do with me. I don't want to connect to them. I have better ways to spend my time than to understand blackness. My perception has not been trained to do this and my imagination fails. I can't get past my prejudice.

I wonder if a truer road to empathy might be to learn the other so that distinctions are honored.

There are 195 countries, each with myriad cultural pockets, over 6000 languages and nearly nine million species on our planet. Nature itself is systems filled with myriad beings synchronized with each other’s distinctions to survive. Dignifying others based on similarity fosters ignorance and foments an increasingly shallower pool of who or what we dignify. It’d be like extolling only blue when the planet is a giant crayon box. This vast and minute variation is a testament to the sacred creativity manifest in our common home.

If my regard of Gentoo penguins stopped at my anthropomorphism, what I projected onto them based on what I perceived as similar, could I know what they specifically need to avoid extinction? Only by becoming familiar with their uniqueness can I properly value and thus advocate for their wellbeing.

Before I turn the page to March, I look up the definition of leap day: Leap days are extra days added to the calendar to help synchronize it with Earth's orbit around the sun and the actual passing of seasons.

There are humanitarian crises at borders worldwide, millions in refugee camps as well as caged; and nonhuman beings, like the Gentoo penguins, are increasingly endangered. Empathizing with only who or what we regard as similar jeopardizes who and what we regard as dissimilar.

Leap day 2020 comes at a time when we need to catapult ourselves to a level of empathy that requires awareness of and response to distinct needs. We are in peril. Our collective survival requires us to leap into synchronicity with who and what we regard as other. We need each other. We don't have extra days to count on.