Where do I even start?

We are experiencing the 6th great mass extinction due in large part to habitat destruction from extractive practices. Mining seaweed for edible water pods is just like mining fossil carbon to create fuel. Isn’t there enough evidence that extractive practices wreak havoc? Why do we seek yet another extractive ‘solution?’

Besides, shouldn’t we have some curiosity as to why seaweed exists in its particular ecosystem in the first place? Maybe, just maybe seaweed hangs out in oceans because it serves a purpose and isn’t just waiting to be siphoned into human use. What right does our species have to disrupt yet another ecosystem? It’s not even to meet needs, but rather to serve the arguably self-indulgent endeavor of an elite few.

All of earth’s systems are destabilizing. Who specifically, in the midst of this, can use the planet for enormously resource intensive events like marathons? Who has this sort of environmental privilege and who ultimately pays for it?

It adds insult to injury to then market such environmental extravagance as sustainable by boasting seaweed pods instead of bottled water. It’s like bragging you’re no longer beating someone with a crowbar but with a baseball bat instead.

What needs to stop is the actual beating. 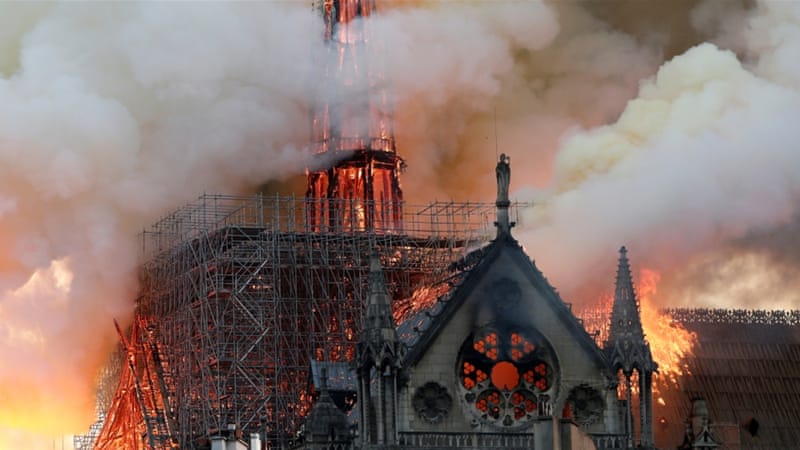 On April 16, 2018, Notre Dame cathedral caught fire. To be clear, it is a magnificent architectural work of art. The timing of this tragedy, perhaps caused by a computer glitch no less, couldn’t be more relevant. Indeed is there a more apt construct to symbolize what needs to burn down in the world today?

First, the global North regards this structure as significant because of the particular history, European imperialism, that we value. But what of the history and architecturally significant constructs beyond the global North, beyond Christendom’s empire? The prevailing Euro-focused literacy is at the expense of an appalling world illiteracy that fosters the white supremacy we continuously grapple with.

Illiteracy regarding the global South needs to burn down.

Second, the cathedral was built through the efforts of Louis VII and the Catholic church. In my research, I found detail on architects and ‘important’ people responsible for its design and execution. There wasn't much on who the actual laborers were or how it was financed other than it was paid for through granting absolution of sins and touring relics. I found little on how such a financial undertaking impacted the common people.

This is not unusual.

History books extol glorious structures and heroic feats with scant information regarding cost and impact to everyday people. Thus in our socio-political DNA we are accustomed to suboptimal and inequitable infrastructure, goods and services for the sake of grand schemes that serve few. Consider how TIF monies are misallocated. Worldwide, consider the colossal expense of Olympic parks versus their long term communal benefit. No longer can the agenda of those who have supremacy be the agenda promoted, perpetuating the disenfranchisement of others, then mis-glorified as good for all in history books.

The agenda of the privileged needs to burn down.

Three, the cathedral sits on grounds upon which the Celts and Romans had temples. The Notre Dame symbolizes the oft violent erasure of belief systems that predate Christianity, typical of religious dissemination. Where is the grief and impetus to reconstruct desecrated sites for those historically and religiously marginalized?

The obliteration of differing religious ideologies needs to burn down.

Four, the building is called, ‘Our Lady.’ She is a static, passive entity upon which we project faith, awe, hopes and desires. This is a skewed reverence for the feminine within patriarchy. It is not female destiny to be the vessel of male projection, regardless of how beautiful or religious you make her.

Patriarchy needs to burn down.

Five, it is significant that the symbol of Catholicism caught fire at the same time that the church is under fire for slavery, the forced ‘reeducation’ of indigenous people, rape and molestation.

Six, religious history would have us believe that the Notre Dame was constructed to honor God. This baffles me. Why build something and honor it more than what the God we claim we built it for, has created himself? WWJD?

Idolatry needs to burn down.

500 oak trees form the ceiling of the Notre Dame. To be destructive of creation to honor the creator is tragically dissonant. We are driving ourselves to extinction by sacrificing nature for a human agenda based on centuries of a malignant understanding of one’s place within creation.

Species supremacy needs to burn down.

It is painful to relinquish that which has been important physically, culturally, symbolically. But who and what does it serve to perpetuate what once was?

If we view the Notre Dame cathedral through the lens of metaphor, look beyond the stunning edifice at the ideological brick and mortar, we can learn something about ourselves and where we are in this moment in history. This lens allows us to determine if we want to remain here, scaffolded in systems and world views that elevate the aforementioned in our collective consciousness.

Because it is not in our global best interest to salvage such constructs, we can allow fire its alchemical work within our consciousness to burn down what once was.

It is from fertile ashes that the new, the needed, can arise.