Maybe we cannot see a holocaust as it is happening because it evolves gradually. Incrementally, dominant society accepts the ideation about and treatment of a targeted group. Whatever injustice occurs is conveniently executed out of sight, thereby out of consciousness.


Human health hinges on a healthy environment. As bitumen is extracted, processed and travels North America through pipelines, it corrupts the environment and threatens the health of marginalized populations-those with the least social, political and financial means.

Northern Alberta
The Athabasca Chipewyan and Mikisew Cree First nation communities downstream from tar sands extraction experience higher rates of cancer, particularly rare forms. Since they subsist on a traditional diet, it may be connected to the deformed fish in Lake Athabasca or the moose that drink from it. And this may be connected to the higher incidence of arsenic, mercury, cadmium, chromium, cobalt and lead in the water. The fish that First Nations peoples consume exceed US guidelines for mercury consumption. This means that parents are feeding their children what, for centuries, they’ve always fed their children. Only now their children also get a dose of heavy metals with every bite.

Speaking of water, there is no contingency plan for tailing ponds once operations at a site are finished. A conservative estimate suggests operational tailing ponds leak about 3 gallons daily. Billions of cubic meters of contaminated water will be left unattended. Do you think anyone’s coming back to clean up? Do you think wildlife know this water is lethal? If the river had always provided your family food and drink, what are your options now?

Besides the water being compromised, remember the forest? Since it’s being clear cut, where will First Nations people get their medicine or supplies for rituals? People previously self-sufficient are now increasingly dependent on social services because the essentials for their traditional way of life are being destroyed.

Minnesota
Enbridge, the largest Canadian tar sands pipeline operator, pumps dilbit south through Leech Lake lands. To keep it flowing, dilbit requires a tremendous amount of heat and chemicals, both of which are corrosive to the pipes, causing fissures and spills all along their length. In fact, there have been over 2,500 pipelines spills in the last decade. In 2010, three spills occurred within a 35-mile radius of tribal boundaries. One spill wasn’t detected until an oil soaked marsh accidently caught on fire and tribal members had to alert the company. Although Enbridge has plans for new construction, there are no plans to clean up existing spills that have polluted tribal waters.

Two major aquifers in Leech Lake are part of a watershed that feeds the Mississippi. What would happen if the headwaters of the Mississippi River-which runs to the Gulf of Mexico-are compromised by tar sands?

Because of eminent domain, landowners and farmers do not have to consent to companies running pipelines through their private property. This is happening in rural areas all over the United States, including Texas, Kansas, Nebraska, South Dakota. Anyway, how would a rural landowner or small farmer stand up to the money and might of an oil company bent on his or her land, even if aquifers, watersheds and community drinking water is at stake.

Michigan
Refineries and heavy industry are mostly located in low-income communities where citizens have the least resources to protect themselves against polluters. 85 percent of residents are African American with a median household income half the national average. Southwest Detroit already has 27 high polluting facilities. Tar sands refineries would exacerbate the already compromised health suffered by people living in area neighborhoods.

When ‘natural’ disasters occur, we rally with generous aid, astonishing compassion and even prayer to support stricken communities the world over. Why would we turn a blind eye then to the slow motion holocaust of nature and people? Fuel?

Only when the last tree has died
and the last river been poisoned
will we realise we cannot eat money.
-Cree Indian Proverb-

Covering 60% of the land area, the boreal region of Canada includes eight eco-zones. There are wetlands, temperate rainforest and deciduous woodlands, each with its own flora and fauna. It is the largest intact forest in the world. Consider the myriad life forms there:  85 species of mammals, 400 of birds, 160 of fish, 3200 of plants.

Why should you care about all that nature?

Because of its remoteness and intactness, 80% of Canada’s First Nations peoples have been able to maintain their traditional way of life for thousands of years. Through treaties signed with the Canadian government, over one million aboriginal people live literally off the land with fishing, hunting and land rights protected. They have been healthy and self-sufficient.

Underneath the boreal forest, is the largest oil reserve outside of Saudi Arabia. Canada and oil companies want this oil from under land allocated to First Nations peoples.

We know a holocaust or genocide is executed and based on reasonably identifiable social, political and/or economic conditions. We also know how governments honor treaties when there’s profit to be had.

Other than it’s beautiful, it is our best defense against climate change:

The boreal forest is the planet’s greatest terrestrial carbon storehouse. So, as the expansion of the tar sands consumes more boreal forest and wetlands, it is releasing to the atmosphere all the carbon stored in this ecosystem. At the same time, we also lose the long term future carbon sequestration of these forests and wetlands. In turn, they are replaced by an industrial operation which produces almost twice as much carbon as conventional oil production. Garth Lenz

To understand what’s happening to the boreal region, its inhabitants, including First Nations peoples, you need to understand the oil.

Bitumen is a thick mixture of hydrocarbons referred to as tar sands because of its viscosity. Tar sands is the dirtiest, most carbon intensive and destructive oil to extract and burn. 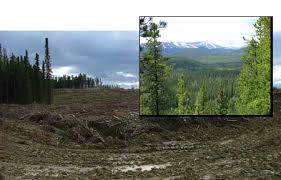 To get to it, the forest is clear-cut; meaning, all or most of the trees in an area are cut down.

Then it is strip-mined to uncover the bitumen.

Remember. This is where flora and fauna call home. It is home to First Nations peoples.

As earlier mentioned, bitumen is thick. It can’t be pumped from the ground like conventional crude oil so steam from fracking natural gas, a water intensive process, is injected into the ground to turn it into a peanut butter consistency.

100 billion gallons of water are drained daily from the Athabasca river because it takes four gallons of fresh water to process one gallon of tar sands into oil.

Wastewater and the leftover chemical cocktail used to create diluted bitumen or dilbit, is stored in tailing ponds. These open, unlined pools of poison are erected near the Athabasca river, the world's largest freshwater delta, and routinely seep out into the ground water.

The mines and tailing ponds are so large, by the way, they can be seen from outer space.

Remember. The Athabasca is where First Nations peoples fish and recreate. It’s home to various flora and fauna. Do I need mention it’s a source of drinking water for communities along its 750 miles?

Large swaths of the boreal region are being turned from this:

This is just the extraction process. We haven't even touched on how dilbit is transported, criss-crossing North America, pipelining toxins in its wake.

What long-term holocaust are we consenting to for short-term social, political and economic gain?