the opposite of courage

Let's start with the violence of monoculture. Forcing the 182 ecological regions that make up America to conform to the unnatural dictates of turf, requires violence to indigenous, naturally pluralistic ecosystems. Since lawns are rooted in elitism, this conformity normalizes the notion that it is acceptable to annihilate what some humans have deemed unwanted. Indeed, that this annihilation is conducted in pursuit of a superficial aesthetic, is violence.

Where else do we coerce conformity? Standardized testing. Beauty standards. Homes associations that police house color, lawns, criminalize chickens, rain barrels, front yard vegetable beds and solar panels and exclude people of color come to mind. Consider where and when the destruction of others is justified for the agenda of a few.

What about lawn maintenance? Noise pollution from blowers, edgers and mowers shatter peace for humans and other beings with whom we share habitat. Air pollution compromises the health of all breathing species. Both these violences more adversely affect landscapers inhaling emissions, bodies pressed daily against machinery. Workers, who are predominately brown and poor, perhaps uninsured and undocumented, are on the front lines of this health violence.

Landscaped lawns foster the violence of female disempowerment. Women have historically been in charge of the care and feeding of their families; having studied, experimented and worked with plants for healing. Lawn monoculture does away with plant knowledge beyond the ignorant, pointless dualism of what we’ve been conditioned to want (grass) and not want (weeds). We have exchanged our healing autonomy and power, passed down and gleaned-communally  and generationally, for ignorant compliance with disease maintenance; ironically, rendered and remedied from the same chemicals used on lawns. This is the violence of a slow motion death industry disguised as health care.

Further, planetary violence is normalized through the sacrifice of water, soil, air and living beings in the service of lawn monoculture. Squandering water in an increasingly water poor world is violence. As is perpetuating fossil fuel addiction and two stroke engines in the era of climate change. And since climate disruption disproportionally impacts marginalized people, we participate in the violence of privilege-which is predicated on injustice.

Let’s widen the lens. Lawn care is an $82 billion dollar industry yet we expect food to be cheap. This fosters violence to workers growing food in criminally inhumane conditions using unsustainable, unethical methods all over the world. Meanwhile lawns are the largest irrigated crop in America. This is in no small part connected to 2017 being the deadliest year for environmental activists as native peoples the world over stand against the global economy, a disastrous monoculture itself.

Landscaped lawns are a violence borne of class, race, gender and environmental privilege. While it’s cringy for a writer to use the same word repeatedly, violence is thusly used to make a parallel. Each time you see a ‘beautifully manicured lawn’, recognize violence toward people and the planet. 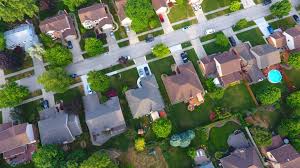 Since North America is made up of 15 ecological regions, further disaggregated into 182 more nuanced areas, landscaped lawns across the country make zero sense.

Meaning, specific flora and fauna naturally thrive in certain areas based on unique geographical features. What flourishes in Alabama is different than in Arizona than in Albany than in…you get the picture.

Remember, lawns originated in Europe as a sign of wealth and brought to America. Early settlers then asserted their agenda on the thriving ecosystems and cultures here.

You know, to tame the continent.

As an immigrant this is baffling. It would never have occurred to my family, or any immigrants I know, to impose our customs, holidays or food on a prevailing culture. We expended time, energy and resources, assimilating to the cultural affectations of the dominant culture.

Instead, European immigrants concocted the notion of Manifest Destiny to justify their eradication of native cultures and take land. Knowing America’s growth is based on aggression and dominance helps us understand how landscaped lawns are historically seeded in the pursuit of a monoculture:

“Lawns became aesthetic extensions of Manifest Destiny, symbols of American entitlement and triumph, of the soft and verdant rewards that result when man’s ongoing battles against nature are finally won.”

The first two posts in this series touch on the psychological and environmental costs of lawns. But what are the sociological implications of bending nature to one aesthetic purpose?