Global warming will force up to 150 million climate refugees to move to other countries in the next 40 years. 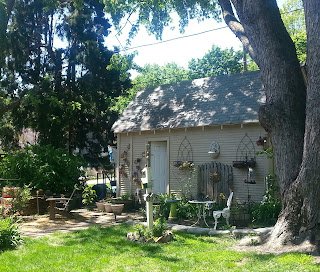 I sidestep cratered sidewalks sprinkled with sweet gum balls ready to turn an ankle, along front yards mudsliding to coat pavement; skirt children’s toys and tree roots. I pay homage to my favorite trees massive and regal in our grid of small shirtwaists and airplane bungalows; pass various yards scaped with natives, vegetables or sprinkled with yard art. I inhale tantalizing aromas from the Pakistani restaurant tucked along a strip of storefronts.

I am strolling through my neighborhood, along streets I’ve known since before I was pregnant with my now 14 year old daughter and have in fact paced through each pregnancy; trudged with babies in slings, in backpacks, pushed in strollers, and walked with them finally self-ambulatory. It is raining, a favorite time to walk because I am surrounded by homes cozy dry; pockets of sanctuary everywhere.

These streets hold our story.

As I turn down my block, I think of my neighbors and our history: the one who to drove to the ER when my youngest caught a goose egg falling on her head; the elderly one I’ve taken slow careful walks with who has since passed; the new one on the corner who turned her backyard into a retreat-like haven; the one up the block who makes Christmas sweets for everyone; the traveling ones for whom we cat-sit; the one who donates to every fundraiser my daughters approach her with; the one across the street who clambered up a tree to chainsaw a branch after watching my unsuccessful attempts with long handled loppers; the ones on either side who kindly buy whatever crafts my kids concoct and sell on the sidewalk.

I think of the 70 year old one next door who taught my girls to hula in the rain, getting drenched along with them; the one down the block who fixes my fix it projects; the neighbor patiently helping me overcome my fear of cycling; the one down the block who gives me poopy straw from her ducks for my garden; the ones who showed up costumed for child-planned Halloween parties; the ones who taught me to garden; the ones all around who kept my car from being towed when I was away birthing my second child and the street was being repaved; the former neighbor who drops by with bags and bags cucumbers from her garden each year and stays for a catch up cup of tea.

This neighborhood holds our stories.

When I think of climate change, I think about the connections in my neighborhood. It is these very webs we humans create that are jeopardized. We take for granted a stable planet to build such community. But tragically, webs established by the intentions and needs of people in relation to one another have been wrecked the world over already.

Indeed our interdependence is predicated on the precise web of an interconnected planet. Just as our needs and intentions shape our relational webs, they also affect the planet’s. We know how relationships suffer when we neglect them. To our peril, we’re experiencing what it is to neglect our habitat.

I cannot stress this enough: now we’re shredding the very web that supports our human-made webs. Think Jenga. When you destabilize the base to build the tower, eventually the whole structure falls apart.

What do we do with this knowledge?

Sometimes when I wish for a different house, one with two full baths, a different layout, a basement that doesn’t love rain, I think of my neighborhood. Then it’s house enough. In fact, it’s plenty.


I know it may not seem an answer but I wonder if it’s a start. Maybe gratitude for what we already have can satisfy insatiable desire, the heedless drive for more wrecking the webs we actually need. Wrecking our pockets of sanctuary.