the Sness of a thing 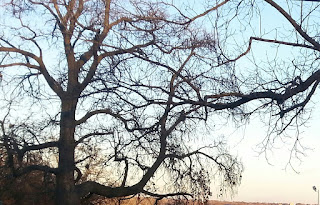 I am not T shaped. I am S. But I have spent most of my life hammering my Sness into Tness because I believed T to be good, S not.

No one criticizes S for not having the sharp angles of a T or expects  S curves from T. Besides, S and T serve different functions and aren’t interchangeable. No one hates either for not being like the other.

But many of us hate winter because it’s unlike fall, spring or summer. I did. I dismissed winter for not having the attributes I defined as pleasing or beautiful: it’s not warm, it gets dark early, the wind is biting, the sky stays grey for days.

I even hated winter trees for not sporting fall colors, the blooms of spring or verdant summer leaves. Their starkness made me uncomfortable. They were S and only T was good.

It was around the time I began recovering from bulimia that it occurred to me maybe winter trees carry a different beauty. Branches are sturdy yet vulnerable bones. Nests hidden during other seasons reveal themselves. The textures and patterns of bark, again overlooked in other seasons, become apparent. And then there is the graceful, ceaseless magic of snow clothing naked branches.

As I began to embrace my Sness, I could embrace the Sness of winter.

Luckily around this same time, I had a boss who insisted we walk during meetings. Outside. Regardless of weather. I had no idea people spent time outside when it was below 50. Other than trees, I began to notice new things: the crisp scent of cold air, the slant of winter sun, scat and paw prints in snow, foliage of wintering plants.

And I didn’t die. And it wasn’t miserable.

It was enjoyable. Invigorating.

Here’s another way to look at it. When getting to know Joan, I didn’t compare her to my friend Martha. I got to know Joan on Joan’s terms. How could I value Joan’s Joanness if I was measuring her against Martha’s Marthaness?

Learning to value winter for its winterness feels like spiritual practice. The cold, early darkness, biting wind and grey skies come with the package. What can I learn from experiencing this as it is, without judgement? How can I embrace the myriad seasons within myself and others?

It is also practice in living in a specific here and now, a particular topography. The Midwest allows us to experience a broad spectrum of weather. Not just T and S, but almost an entire climate alphabet, if you will. Gardening highlights the value of this variance too. Do you know we have three growing seasons? Spring, summer and fall grow different veggies; then the alchemy of winter replenishes the soil. What a gift of this longitude and latitude we inhabit.

Appreciating winter is also an opportunity to trust, anticipate and savor rhythms not of one’s making; rhythms ancient and wild and orderly and purposeful and with more wisdom than narrow human ideas of what is pleasing or beautiful.

But this appreciation didn’t happen overnight. Embracing something you once loathed, whether it's a person, one’s body or a season, takes time. Time spent getting to know the Sness of a thing.